Is the new age of INSURANCE about creating CLONES? 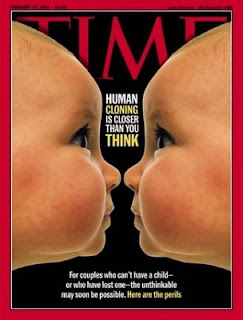 Well, insurance sector is posed to be the largest sector with turn-over predicted to be more than any sector. After credit cards this industry will clock billions in sales. Earlier it was roti, kapada aur makan. Then the wants increased with money, so focus shifted to lifestyle. Further this led to lifestyle related diseases. To save themselves from these diseases people shifted to health and healthy living. With healthy living gaining importance this gennext humans dream to live longer from 70 years to 700 years. Scientists have always worked towards achieving the human dreams and converting the perception to reality. This actually led to more and more scientists working on projects to increase the life span of humans.
The media often spoke and published articles related to these new innovations, some of them I have tried listing below:

Some scientists went to a further step and started research on creating clones... I mean cloning of a Human to create a look-a-like (Clone means look-a-like with the same qualities, thinking skills but without birth deformity). Earlier the organs were cloned and stored for future use. But then huge organ banks will be the need of the future to store those different organs. Also, the scientists were not able to predicate how long the organs will survive.

The next-gen scientists thought about this and researched discussed & argued... They reached to a conclusion that if a clone of human is created and kept in controlled surrounding, without contamination from outside environment; the clones’ body parts (organs) can be used by the clone owner when required. The research for creating clones received lot of funds from big corporates as CSR initiative, while this highlighted the corporates initiative towards human development, but they had their inner greed to live longer. The research started on rats, dogs, monkeys, etc to create the perfect CLONE or should I say INSURANCE…

But is this right, should we challenge the creator of universe and try to change the laws of nature? The world is already populated with people, with pollution and with everything to destroy mother earth. This new research on cloning will kill existence of living beings.
Imagine each living human having a clone staying somewhere out there in a lab far from city, these clones start thinking of getting out from lab and going out in the open world, I mean leaving the lab, leaving the controlled environment and going out in t. Will have humans of same type, more than that where are we going to the cit live life. These will double the existing population of the world leading to blast of population in the world...

Today this will sound really weird and unbelievable but this situation will hold true in the coming century, INSURANCE will all be about CLONING and increasing life-span. Below some links to website offering information on cloning