How to build spaceship - book review

How many of us know about early life of Peter Diamandis, founder of X prize, founder of Singularity university?
Then you shouldn't miss this book "How to make a spaceship: A band of renegades, an epic race and the birth of private space flight" by Julian Guthrie.

And this book is not only for people interested to build ROCKETS but for all those who DREAM.
Some interesting insights I gained from this book 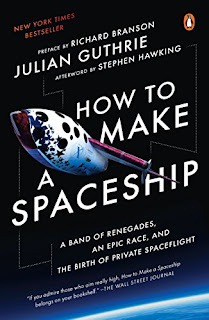 If you can dream Big, and work towards it with all your passion, their is no stopping.

This book was written by Julian Guthrie and After Spaceship 1 win the Ansari SpaceX prize, Stephen Hawking suggest  Peter Diamandis to write a book on this entire experience, so technically this a Peter's biography prior to start of Singularity University.

Posted by Moses Gomes at 1:56 AM No comments: