This book Modern Monopolies by Nicholson is a must-read for all entrepreneurs, start-ups, strategy heads of brands/ Products. It highlights the importance of being in platform business and how this impacts the growth of organisation, as most software companies are becoming commodities.

As you move towards chapters four, the author gives examples on successful platforms like Facebook, Twitter,  Android OS, AirBnB, Uber and reason behind their success. He also highlights platforms like Windows OS, BlackBerry OS, MySpace, Friendster, etc and why they failed or failing.

He furthers goes on to explain interesting shifts that are happening in the platform business. Earlier examples include iTunes during launch of iPod became the largest music company, but now people are shifting towards newer platforms like Spotify, Saavan, Gaana, etc.

Even when Amazon launched Audible platform, which became a market leader in it's category. But now new platforms like Storytel are offering ebook + Audio book + Regional at a monthly nominal subscription. Though subscription cost is higher but, this gives the customer freedom to choose and read / hear multiple books.

Here is the story which I loved from the book ans have copied as is, since it makes sense and easy to understand. Though many argue this is not a real story, but conclusion is important for learning.

An entrepreneur, tired of the long waits he is experiencing in his dentist’s office, decides that dentist offices are badly managed. So he designs and builds a comprehensive dentist office management system and brings it to market. The software is expensive, at $25,000 per year per dentist office, but it’s a hit anyway as dentists realize significant cost savings after deploying the system. The company, Dentasoft, grows quickly into a $100mm annual revenue business, goes public, and trades up to a billion dollar valuation.

Two young entrepreneurs graduate from college, and go to YC. They pitch PG on a low cost version of Dentasoft, which will be built on a modern software stock and include mobile apps for the dentist to remotely manage his office from the golf course. PG likes the idea and they are accepted into YC. Their company, Dent.io, gets their product in market quickly and prices it at $5,000 per year per office. Dentists like this new entrant and start switching over in droves. Dentasoft misses its quarter, citing competitive pressures, churn, and declining revenues. Dentasoft stock crashes. Meanwhile, Dent.io does a growth round from Sequoia and hires a CEO out of Workday.

Around this time, an open source community crops up to build an open source version of dental office software. This open source project is called DentOps. The project takes on real life as its leader, a former dentist turned socialist blogger and software developer named NitrousOxide, has a real agenda to disrupt the entire dental industry. A hosted version of DentOps called DentHub is launched and becomes very popular with forward thinking dentist offices that don’t want to be hostage to companies like Dentasoft and Dent.io anymore.

Dentasoft is forced to file for bankruptcy protection while they restructure their $100mm debt round they took a year after going public. Dent.io’s board fires its CEO and begs the founders to come back and take control of the struggling company. NitrousOxide is featured on the cover of Wired as the man who disrupted the dental industry


Towards the end, the book explains how to identify true potential of your own product and how you can make the shift towards becoming a platform.


Software is a commodity, think platform. 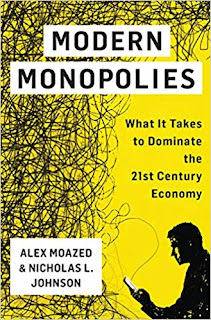 You can click on this link to buy -
Modern Monopolies @ Amazon

Posted by Moses Gomes at 1:41 AM No comments: